author February 20, 2020 0 Comments
Mysteries abound where most we seek for answers.”
― Ray Bradbury 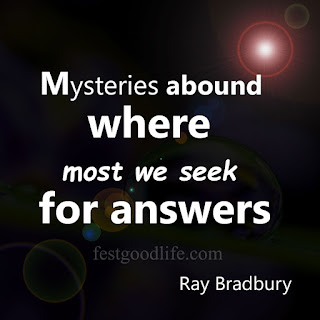 “He who does not answer the questions has passed the test.”
— Franz Kafka

“Talk of mysteries! — Think of our life in nature, — daily to be shown matter, to come in contact with it, — rocks, trees, wind on our cheeks! The solid earth! The actual world! The common sense! Contact! Contact! Who are we? Where are we?
― Henry David Thoreau

“The frog in the pond knows little of the great ocean.”
― Zen Proverb

“Astonishment is the proper response to reality.”
— Terence McKenna

“Life is not a problem to be solved, but a reality to be experienced.”
― Søren Kierkegaard

Quotes about Death
“Life is for the living.
Death is for the dead.
Let life be like music.
And death a note unsaid.”
― Langston Hughes

Langston_Hughes_by_Carl_Van_Vechten_1936
Langston Hughes
“As I have not worried to be born, I do not worry to die.”
― Federico García Lorca

“Nobody owns life, but anyone who can pick up a frying pan owns death.”
― William S. Burroughs

Quotes About Freedom
Kierkegaard“People demand freedom of speech as a compensation for the freedom of thought which they seldom use.”
― Søren Kierkegaard

“Nothing is more wonderful than the art of being free, but nothing is harder to learn how to use than freedom.”
— Alexis de Tocqueville

Quotes About Nature
“The clearest way into the Universe is through a forest wilderness.”
― John Muir

“Trees are poems the earth writes upon the sky,
We fell them down and turn them into paper,
That we may record our emptiness.”
― Kahlil Gibran

“The wise man knows that it is better to sit on the banks of a remote mountain stream than to be emperor of the whole world.”
― Zhuangzi

“Nature does not hurry, yet everything is accomplished.”
― Lao Tzu

“We can never sneer at the stars, mock the dawn, or scoff at the totality of being.”
― Abraham Joshua Heschel

“Consistency is contrary to nature, contrary to life. The only completely consistent people are the dead.”
― Aldous Huxley

“A morning-glory at my window satisfies me more than the metaphysics of books.”
― Walt Whitman

“I believe in God, only I spell it Nature.”
― Frank Lloyd Wright

“The earth has music for those who listen.”
― George Santayana

Quotes About Genius & Insanity
“In individuals, insanity is rare; but in groups, parties, nations and epochs, it is the rule.”
― Friedrich Nietzsche

800px-Nietzsche187a
Friedrich Nietzsche
“We do not have to visit a madhouse to find disordered minds; our planet is the mental institution of the universe.”
― Johann Wolfgang von Goethe

“Genius is the recovery of childhood at will.”
― Arthur Rimbaud

“We are all geniuses up to the age of ten.”
― Aldous Huxley

Quotes About Meditation
“Make your ego porous. Will is of little importance, complaining is nothing, fame is nothing.”
― Rainer Maria Rilke

“Your mind will answer most questions if you learn to relax and wait for the answer.”
― William S. Burroughs

Quotes About Religion & Morality
“In reality there are as many religions as there are individuals.”
― Mahatma Gandhi

Portrait_Gandhi
Mahatma Gandhi
“Never let your sense of morals prevent you from doing what is right.”
― Isaac Asimov

“It is not always the same thing to be a good man and a good citizen.”
― Aristotle

“Right or wrong, it’s very pleasant to break something from time to time.”
― Fyodor Dostoyevsky

“There are no passengers on spaceship earth. We are all crew.”
― Marshall McLuhan

“Immorality, no less than morality, has at all times found support in religion.”
― Sigmund Freud

Quotes About Relationships & Friendships
“I have learned that to be with those I like is enough.”
― Walt Whitman

Walt_Whitman_-_George_Collins_Cox
Walt Whitman
“It is not a lack of love, but a lack of friendship that makes unhappy marriages.”
— Friedrich Nietzsche

“If you hate a person, you hate something in him that is part of yourself. What isn’t part of ourselves doesn’t disturb us.”
― Herman Hesse

“Everything that irritates us about others can lead us to an understanding of ourselves.”
― C.G. Jung

Quotes About Justice & Politics
“Never forget that justice is what love looks like in public.”
― Cornel West

“He who loves the world as his body may be entrusted with the empire.”
— Lao Tzu

“Protest beyond the law is not a departure from democracy; it is absolutely essential to it.”
― Howard Zinn

Quotes About Modern Life
“We need way more intimacy than nearly anyone considers normal. Always hungry for it, we seek solace and sustenance in the closest available substitutes: television, shopping, pornography, conspicuous consumption — anything to ease the hurt, to feel connected, or to project an image by which we might be seen and known, or at least see and know ourselves.”
― Charles Eisenstein

“We live in a world where there is more and more information, and less and less meaning.”
― Jean Baudrillard

“If you don’t have a strategy, you’re part of someone else’s strategy. ”
― Alvin Toffler

“Americans may have no identity, but they do have wonderful teeth.”
― Jean Baudrillard

“We in the richest societies have too many calories even as we starve for beautiful, fresh food; we have overlarge houses but lack spaces that truly embody our individuality and connectedness; media surround us everywhere while we starve for authentic communication. We are offered entertainment every second of the day but lack the chance to play. In the ubiquitous realm of money, we hunger for all that is intimate, personal, and unique.”
― Charles Eisenstein

Quotes About Compassion & Generosity
“That’s what I consider true generosity: You give your all, and yet you always feel as if it costs you nothing.”
― Simone de Beauvoir

800px-Simone_de_Beauvoir
Simone de Beauvoir
“No one has ever become poor by giving.”
― Anne Frank

“The greatness of a nation and its moral progress can be judged by the way its animals are treated.”
― Mahatma Gandhi

“One’s life has value so long as one attributes value to the life of others, by means of love, friendship, and compassion.”
― Simone de Beauvoir

Quotes About Everything & Nothing
“Disillusionment in living is finding that no one can really ever be agreeing with you completely in anything.”
― Gertrude Stein